Dean has brought his Muay Thai coach, Soren, over from the Northside for you all! Soren King, or as he’s known in the fighting world, Soren Monkongtong… or the Long Golden Dragon .. is our Muay Thai coach!

Soren is an ex-professional Australian Middleweight Kickboxer. He’s given up fighting to follow his passion of training other people in Muay Thai. He’s not really taking on fighters as students anymore, he much rathers beginners or amateurs!

In Soren’s fighting career he had a grand total of 84 fights with 57 wins (34 by KO). He was also on ‘The Contender Asia’ series with John Wayne Parr, Yodsanklai and Dzhabar Askerov (probably won’t mean much if you don’t follow Muay Thai.. but we’re super excited about it!)

If you’d like to learn some punch punch kick kick elbow elbow knee knee… contact us today and we’ll organise a free trial for you! 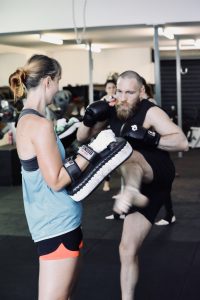 Want to know a little more about our Personal Training services & pricing? Click to the right and leave your contact details. One of our Brisbane-based Personal Trainers will be in touch within 24 hours.